All things bright and beautiful

This has been a rough week. It has also been an amazing week.
It has been a week that has shown me how the life can be so full of love and within that love come such loss and heartbreak.

In my line of work, I say many times throughout the year, "My patient died." It's part of the weekly, sometimes daily routine of a palliative care physician. To some extent, all of the deaths affect me. Maybe not because I knew the person or their family, or felt sadness or loss from their death, but because in any death I am always reminded of the fragility and splendor in which we exist.

This week, though, I was hardly able to say the words out loud, "my patient died" in speaking about one of them. She was not just a patient. She and her family had come into a place in my heart that only a handful of patients and families have ever been allowed. They inspired me with every interaction I had, and although my medical mind knew the reality of what would eventually happen, I found myself, like them, believing that if anyone was going to have a miraculous healing and beat the odds and live a long, full life, it would be her. We had watched her survive episodes of critical illness that would kill or physically devastate most patients, but weeks after coming through one of these episodes, she was off to DisneyWorld for two weeks with her family, including her young daughter - riding rides, swimming, living life as if there were no illness waiting to overtake. She amazed us.

So when she came back to the hospital days after getting home, critically ill, we all hoped it was another of those episodes. The news wasn't as good this time, though, and when she was able to get to a point where she could get off of life support machines and get home with her family, forces rallied around her to get her home to be with her family. I sat with her before she left the hospital, we held hands, we talked about our hopes, and that even if God's plan for her was not to watch her daughter grow up, that I knew she would still be with her every single day of her life. We both had a few tears. Her family joined our visit, I answered a few logistical questions, and eventually I needed to go - but not after several hugs and a look into my patient's, my friend's eyes, telling her I would think of her every day.

I knew medically that her time at home would likely be short, and my hope was that it would be calm, comfortable, and another chance for her to be a mom, a wife, a daughter if even just for a few days.
From her family, we heard she had just that, for one whole day of being with them at home, before she died in her sleep overnight.

It's one of the rare times, perhaps really the first time I have felt this deeply, "I don't know if I can do this." I don't know how often or how many times in my career I will ever be able to bring someone in this close before it ravages all of my emotional reserve. On the other side of that thought though, is the knowledge that whether or not to let someone in so close is beyond my control, and there are simply going to be people I meet as patients that come to that place in my heart, and as broken as a piece of my heart is left, it also leaves me knowing that this is my place in life, my calling, and is a humbling gift. 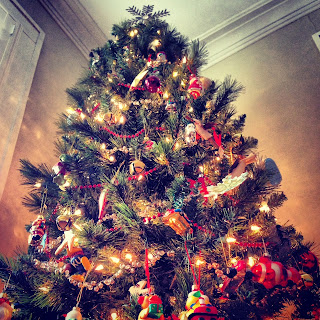 This gift was revealed this week in my own life as I spent an evening putting up the Christmas tree with my boys. This is much later in the year that we normally put up the tree, but I wanted it to be something all four of us were able to do together, and I waited. In past years I have waited everyone had gone to bed, or I had a half day off home by myself and I have decorated the tree just so, making sure the styles and sizes and colors of ornaments were evenly distributed. If Henry offered to help I would give him a few ornaments that he could place himself, and if they didn't end up in the right place I would either make him move them or would later relocate them myself. It's a habit I picked up from my mom (sorry mom), and I always remember those red and white checked ornaments that would always end up needing to be moved so we didn't have too many of them too close together. 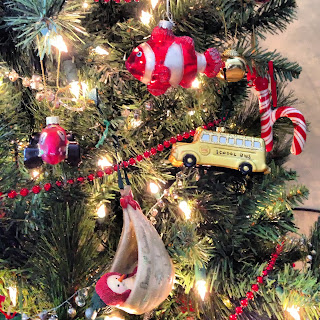 This year, Henry showed a new and enthusiastic interest in decorating the tree, and so before we started opening the ornament box, I thought to myself, "just let this happen." And it was so much fun. Henry is old enough now that he remembers acquiring some of our ornaments, he knows he was with me when we picked out some of them at the store, he knows which are his "birthday ornaments" and which are Leo's. He would pull some of them out of the box and marvel at the colors or the details. And he had certain places he wanted them to go, places I would not have chosen aesthetically, but that to him, made sense. Some of the locations were chosen because they made a story or theme together. He put his birthday ornament, and his "H" ornament, and two other of his favorites together near the bottom of the tree. He hung several jingle bells around the bottom like a fringe. He told Leo stories about some of them. We had a fire in the fireplace. The boys drank hot chocolate. For a little while, Tom played the guitar and we made up songs and then Leo started shouting "Jing-Go Bells! Jing-Go Bells!" over and over while he very seriously shook his jingle bells.

And as if that isn't all enough, somewhere in the midst of all this, Henry put his arms around my waist and said, "Thank you, mommy. Thank you for doing this tonight."

I type this now and am both somewhat embarrassed of the overwhelming perfection we had for a couple of hours in our house, and am also wiping tears and snot off my face as I sit here crying.

It is one of the best nights our family has had. No yelling, no fussing, no bickering. I know that Tom and I, and Henry, will always remember that night. It makes me so happy that Henry has that in his mind now and I hope that if and when he is a father, and while he puts up a tree wit his family, he thinks back to our night when he was six years old. I hope that Leo, though he won't keep details of it, will look at an ornament that I make him take for his own tree, and for some reason feel warm and happy when he looks at it.

And for this night, I have to thank my patient. If it weren't for her allowing me into her life and to be a part of her journey, I don't know that I would have let myself and my family have our evening. I might have forged ahead and put up the tree at midnight one night when I was too wired to sleep, or have fussed at the kids or rushed them along, or been irritated when Tom started playing his guitar. Instead, my heart was more open to my family and to valuing the time together rather than rushing through it. I didn't even try to make it perfect - which has never worked in the past anyway. I just wanted us to be together, to slow down, and to enjoy. Without her, I might have forgotten about the importance of taking life one day at a time, and loving those we have in our lives more than we love all of the other stuff that distracts us from them. 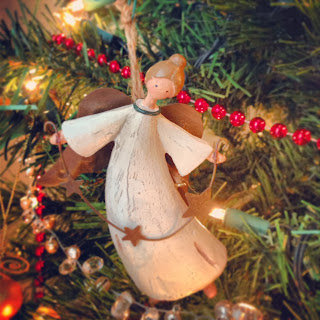 So, when people tell me, "I don't know how you do your job," or when less kind people say that I do this work because I somehow "like" death, this story is my answer. I can do what I do because what I get from it is an embarrassment of riches. And I do not "like" death, instead, I love life. Death is a fact in this life, and finding the ways to help others live to their best in turn reminds me to do this myself.

In the spirit of this season, my wish is for love and peace in the hearts of my family and friends, for moments here and there that bring you awe and remind you of the fullness of your lives. And for all those I am grateful enough to know as my patients, I say, again, "thank you."

If you've been following me on "One Flew Over" for awhile, you may notice some changes.
"One Flew Over" will now be my blog for chronicling my more professional endeavors. It will still be strongly featuring my personal experiences, my reactions, thought, feelings - all that juicy stuff.
If you're still interested in following my more goofy personal escapades as a mom, wife, liberal citizen of the world, just drop me a line and I'll direct you to the "new" island on the www.

The details included in the stories on this blog have all had essential elements, including potential identifying information, changed to maintain the anonymity of those involved.
If you feel that you can identify yourself or someone you know in these posts and are concerned about issues related to identity or anonymity, please let me know by emailing me at eriegel@kumc.edu.

I am also proud to be a contributor on pallimed.org, where I focus my more professional blogging efforts. Check out www.pallimed.org